Were steaming artichokes an 80’s fad?  Every time I mention steaming artichokes, one of my friends recalls that their mother did this all the time when they were a kid…my mother did it too.  I will always remember sitting around our kitchen booth (yes we had a booth) and dipping the steamed artichoke leaves into lemon butter before using my teeth to scrape away the flesh.  I’m not even sure that I really liked the taste of artichoke at that age but the process was fun and I was dipping something in butter so it was a no brainer.

Steamed artichokes are sort of a best kept secret, I was holding one up at the store the other day and a lady said, “what in the hell are you going to do with that thing?”  My initial response was, “I love you and will you be my new best friend”…and then I went on to tell her how easy it is to prepare the whole artichoke.  She was also confused about where the heart was, “is it in there?”…I reassured her that it was indeed in there but that eating that part would be the grande finale…she bought 3 artichokes.

I love making artichokes because they are sort of a blank canvas, you can infuse them with all sorts of flavors.  You can tuck ingredients (like garlic cloves) down into the leaves or throw herbs and spices into your steaming water (that’s what I did this time).

You do need some sort of double boiler set up for this…here’s what I always use. 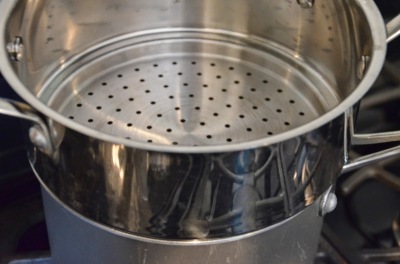 I used 2 artichokes for this recipe…look at these beauties!

You will need to get these babies ready for their steam bath, but that is really easy…just chop off that big stem on the bottom, also chop about an inch off the top…and then clip the outer leaves with some kitchen scissors.

Now place about 3 inches of water in the bottom of your double boiler and add any herbs or spices you fancy.

Now just put your artichokes into the top of the double boiler, put the lid on and place over medium low heat.

So I ran into a “slight” problem in that my artichokes were too big for my pot so I couldn’t get the lid on.  I cut one in half and it cooked just fine…
After about an hour you will have something that resembles this… 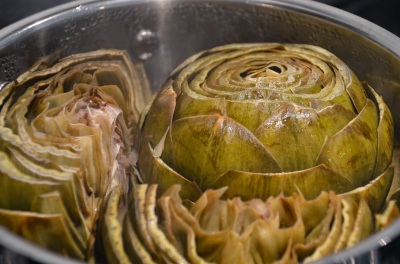 I usually do a taste test right about now to make sure the flesh on the leaves is nice and soft.  You should be able to pluck one right out with no problem.
The last thing I do is prepare the lemon butter dipping sauce, here’s what you need for that…

Crazy complicated I know…I used salted butter but if you use the unsalted variety I would recommend adding some salt.
Here is your steamed artichoke ready for you to devour…

All you need to do now is pluck a leaf, dip it in the lemon butter, put the leaf between your teeth, and then pull the leaf out while scraping the flesh away from the leaf…and then throw the leaf on the floor.  Or I guess you could put the discarded leaves in a bowl or something, my kids don’t seem to get that concept though.

Once you get toward the inside of the artichoke, you will start to see that there’s a meaty part near the steam (that’s the heart)…however it has some stringy stuff attached to it.  You just need to scrape the hairy stuff off and then you can eat the heart.  I did all of that and then went to get my camera to snap a pic of the heart but when I came back (5 seconds later) it was already gone.  My husband was all like, oh did you need that?

If you’ve never steamed an artichoke but you like artichokes (or even if you just like melted butter and need a reason to eat it) I suggest you try this out…and let me know how it goes!